Traps and pots are enclosures or devices that fish, crustaceans or molluscs enter voluntarily, or are entangled in, but from which they are prevented from escaping in some way. Animals are enticed into the enclosure either by bait or because the apparatus appears to provide a refuge. Most traps and pots are set on the seabed or riverbed with a haul-in line, surface float or dan buoy to mark their position. They can have one or more entrances or openings on the top or sides, depending on the target species. A line hauler is often used to pull traps and pots for checking and rebaiting.
Toggle content

Fish traps can be set in water depths ranging from 2 m to hundreds of metres. They are made in a variety of shapes and sizes, depending on the target species. Most baited traps are set on the seabed, with at least one entrance facing down-current. The traps are left to fish for around 20 minutes to 24 hours.

Rectangular traps with a frame covered in light wire mesh are used in New South Wales to target Snapper, bream and morwong. In South Australia, rectangular traps with a steel frame covered in wire mesh are used to target Ocean Jacket. Both trap designs may have one or more tapered oval entrances located on the side, towards the top. Rectangular metal traps with tapered entrances on their sides (towards the base) are used in the Northern Territory to target demersal snappers. The weight of these traps ensures that they fish on the seabed. Fish traps in Western Australia are used to target tropical demersal reef fish such as snappers, emperors and groupers. They are either square or rectangular, with one side of the trap leading into a funnel-shaped, tapered, vertical slit entrance.

Batten pots are used mainly for Western Rock Lobster. The pots are rectangular, with tapered sides and a single entrance at the top. They are constructed with a steel base with wooden slats (battens) on the sides and top. The traps are baited. Undersized rock lobsters that enter the trap can escape through the escape gaps near the base of the pot. 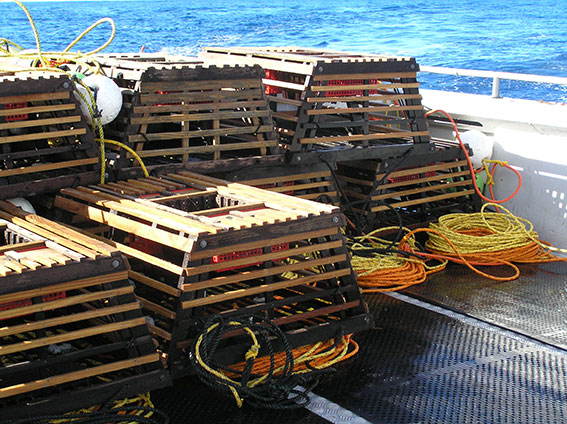 Beehive pots are used to target rock lobsters in southern Australia. They are dome shaped, constructed of a wire frame over which wire or cane is woven. There is a single entrance at the top, which is usually cane lined. Across much of the fishery, escape gaps are installed near the base of the pot to release undersized rock lobsters and bycatch.

Steel pots with an entrance at the top (as for beehive pots) tend to be used for Southern Rock Lobster fishing in deeper water. They can be rectangular or round, and are made from steel covered in synthetic mesh.

Rectangular traps, which are used in waters off New South Wales to target Eastern Rock Lobster, are larger and of a different design from those used for Southern Rock Lobster. They are smaller than rectangular fish traps, and have side entrances.

There are many different shapes and sizes of crab traps and pots; they are generally of a similar size to rock lobster pots. They are baited and left to fish for several hours to several days. Crab traps are rigged, set and hauled in a similar manner to fish traps, and are retrieved either manually or by line hauler, depending on their size, configuration and deployment depth. Escape gaps are used in some crab fisheries to enable undersized crabs to exit the traps.

Blue Swimmer Crab traps are netted enclosures comprising two rings (usually about 1 m in diameter) separated from one another by three or four posts, or through the use of a positively buoyant upper ring and a weighted lower ring. The waist of the trap is constricted, such that the trap resembles an hourglass. Both the diameter and the height of the trap can vary substantially within or between fisheries. Blue Swimmer Crab traps are usually collapsible and may have one, two or three pairs of opposing side-entry funnels. 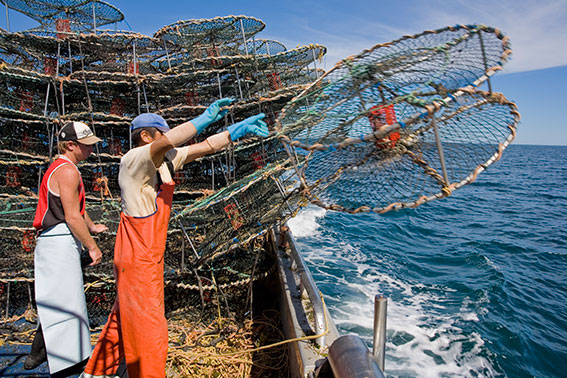 Giant Crab traps are similar to the steel pots used for rock lobster, with a top entrance. They are heavily weighted to prevent them being dragged by current movement on the buoylines.

Dillies (also known as lift nets and hoop nets) are generally configured as a steel hoop with a shallow bag and some bait above. Dillies are left on the sea floor for a matter of hours, and then lifted by bridles attached to the hoop in such a way that the frame remains horizontal and the catch is contained in the bag. Drop nets are of a similar configuration to dillies, but include an additional steel hoop connected to the original hoop by a collapsible mesh wall.

Tangle nets (also known as inverted dillies and witches hats) have a similar design to dillies but use fine monofilament mesh inverted above the base ring with a small net float. Bait is secured to the base ring inside the mesh cone, and crustaceans become entangled in the mesh while attempting to reach the bait. Tangle nets have been prohibited in several jurisdictions to ensure that undersized crabs can be released without damage and to minimise the risk of entangling turtles. They are still commonly used in New South Wales.

Hawaiian-style flat tangle nets (also known as Spanner Crab nets or flat snares) comprise a square or circular steel frame across which a layer of multifilament mesh is tightly stretched, and bait is positioned centrally. These nets may be deployed individually or as part of a demersal line attached to a floatline for periods of 30 minutes to several hours.

Octopus traps or pots are, or have been, used commercially in central and southern Western Australia, South Australia and Tasmania. Octopus pots are made of plastic, pottery or PVC tubing, weighted with concrete, and typically have a volume of 4 litres. Octopus enter the pots seeking safe refuges.

Pots are clipped along a demersal mainline at regular intervals, with up to 500 pots set on a single line. The mainline is weighted or anchored at both ends, with a haul-in line and buoy attached to each weight or anchor. The pots are left to fish for approximately 7–45 days, allowing the octopus to use them as a home. Pots are weighted to minimise movement of the gear in exposed waters.

Nets or netting material are used in many configurations to trap fish species.

Lift nets (also called hoop nets) are used in southern Western Australia and (rarely) in Victoria to catch Australian Sardines and Australian Herring. The net resembles a large dilly with a weight in the end, forming a long, tapered bag. The net is set off wharfs or from small vessels. It can be used by night with a light, or by day with berley to attract fish. The net is hauled vertically, trapping the aggregation of fish.

Tunnel nets are used along the coast or in estuaries in southern Queensland to target many species, including mullet, Tailor, flathead and Luderick. The net is constructed of two long (up to a combined length of 1700 m) wings and a central pocket or 'tunnel'. An area in which fish concentrate, or a school of fish, is located at high tide, and the net is staked in position to form a large arrow shape, with the wing ends circling inwards to lead escaping fish back into the net. The net relies on fish encountering the net as they move with the receding tide. The fish become concentrated in the tunnel, which remains in the water at low tide. The tunnel section is finally lifted on board a dinghy and emptied.

Stow nets (also called set pocket nets, pocket nets, stripe nets or stake nets) are used in estuaries and rivers of southern Queensland and New South Wales to target School Prawns and Bay Prawns. The gear resembles a small mesh prawn trawl and can be set in two ways. The first has the net staked by the wing ends across the current, using the current to open the net and wash the prawns into it. The second has the net set into the current, with stakes along the net to hold it open. The net is set close to the shore and catches the prawns as they move down the river into the incoming tide.

Trap nets are used in southern Western Australia to target Australian Sardines and Australian Herring. The net may be a long, straight panel, or may include a pocket or bag at its inshore end. Trap nets are set in a configuration that resembles a '6' or 'G', and rely on the target species' natural circling behaviour to remain in the net. They are set during the migration period of the target species. Trap nets are set in the afternoon and are left to fish all night, with hauling occurring after dawn.